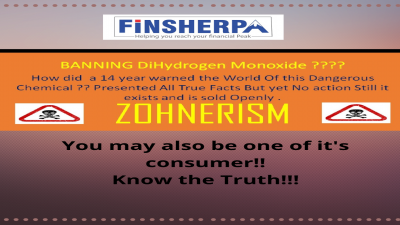 Zohnerism & it's effects on investing

If you have got back from a busy day at office and switched on TV on 23rd March 2020, you would have been shocked and depressed, the Sensex tanked again by another 3500 points to reach another bottom at 26,000 pts. Since the start of March, in three weeks the sensex had dropped from almost 40000 points to less than 27000, a fall of over 32% in your equity portfolio values. If you are an avid tv viewer, you were being bombarded with information as to how your wealth had eroded, sometime with headlines like “Rs 5,00,000 crores of investors money wiped out”, while other times the usage of BLACK before the day, we now have a BLACK before everyday except Saturday & Sunday ( since stock markets don’t function on those days). The news channels have mastered the art of amplifying the impact of any event.

In 1997, 14 year old Nathan Zohner presented his science fair project to his classmates, seeking to ban a highly toxic chemical from its everyday use.

The chemical in question? Dihydrogen monoxide.

Throughout his presentation, Zohner provided his audience scientifically correct evidence as to why this chemical should be banned.

He explained that dihydrogen monoxide:

-----Causes severe burns in while it’s in gas form

-----Zohner also noted that the chemical is able to kill you if you depend on it and then experience an extended withdrawal.

He then asked his classmates if they actually wanted to ban dihydrogen monoxide.

And so 43 out of the 50 children present voted to ban this clearly toxic chemical.

In fact, dihydrogen monoxide is simply an unconventional scientific name for ‘water’.

Nathan Zohner’s experiment wasn’t a legitimate attempt to ban water, but instead an experiment to get a representation of how people could be influenced by how information was presented to them.

Also, all of the points that Zohner used to convey his point were 100% factually correct; he just skewed all of the information in his favor by omitting certain facts.

In recognition of his experiment, journalist James K. Glassman coined the term "Zohnerism" to refer to "the use of a true fact to lead a scientifically and mathematically ignorant public to a false conclusion".

What’s Zohnerism got to do with investments ?

All the media reports about the market dropping and destroying wealth while true has very little use to some body who does not need the money immediately and has atleast a few more years before requiring the money. So factually it is a useless information. However the impact of the news makes a lot of people react and pull out their investments at a BIG LOSS.

In fact investors who did not follow the news in that time and weren’t unduly perturbed about the fall ,benefited the most since the markets recovered in a few months and just recently hit an all time high at ( sensex: 44,000).

The way to create long term wealth by investing esp in an asset class like Equity is to stay away from the noise of day to day volatility and look at the big picture in the long term. Am sure you will have a great wealth creation experience.

So counter intuitively not watching news frequently could be a great wealth creating idea.

So the next time you see breaking news about a stock market collapse or a high, recheck if it has any relevance to your need for the investments, if not, do not react.. you will end up wealthier if you do not react and you will have 14 year old Nathen Zohner to thank for.