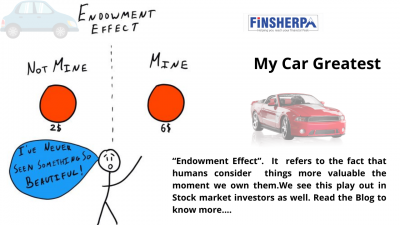 A couple of years ago,  I accompanied a friend who wanted to buy a second hand AUDI car, the dealership had a few cars , one navy blue colour car was particularly nice.  It had done a few thousand kilometers  and had a lot more life to it.  The dealer was expecting  Rs 20 Lakhs( original cost must have been 32 Lakhs), my friend was looking to buy it at  15 Lakhs. So the deal did not go through.

However a week later the dealer called my friend and agreed to sell it at 16 lakhs and concluded the sale. As my friend was completing the paperwork to pick up the car, there was another customer who was interested in the same car, since the salesman had said the vehicle was sold, the man offered my friend a sum of Rs  18 Lakhs. A cool Rs 2 Lakhs profit  almost instantaneously.

Guess what my friend did, he declined the offer. This completely beats the logic. A minute ago he did not own the vehicle, now he was getting Rs 2 lakhs for nothing. But yet he declined.  I was stumped.

However come to think a little deeper  in his mind it was worth 20Lakhs, which he had paid a bargain price and his mind would not accept a significantly lower sum to Rs 20 lakhs..

We humans have unique ability to add a couple of zeros to things we own. Why  ?  the fact that we own it,  it must be valuable. We attach a higher value to anything, when we own it. This is often referred to as “Endowment Effect”.  It  refers to the fact that humans consider  things more valuable the moment we own them. Large Auction houses like Christie & Sotheby thrive on this concept.

In fact in large commercial auctions like the Mobile airwaves auction by  the govt, often the successful bidder  turns out to be a big loser economically if he gets caught in the fervor and overbids. After all just because you believe it is worth more, does not mean it is.

We see this play out in Stock market investors as well. The stocks that we hold become somehow more precious than they really are. So we will do whatever justification as is necessary to hold on them irrespective of the reality. We often see this in people clinging to poor  real estate or poor stock or poor choice of mutual investments, somehow  believing that their investments to be multi baggers.

In conclusion, please be aware of the endowment effect in all your assets. Think of your things  as something that the  universe has bestowed on your temporarily. So don’t cling to things. Look at  it more rationally, is  it is serving your purpose of what you planned for yourself ?

If the answer is yes, hold it ;

if the answer is no, get rid of it

and get to something that will help you reach your financial goals better.

Whenever you are evaluating your investments run the endowment filter to check if you are overvaluing them.