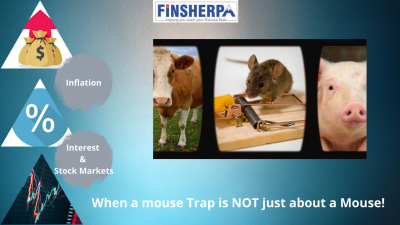 These Three seemingly unconnected aspects have great linkages with each other. Inflation, Interest Rates and Stock Markets.

Story of the Animals in a farm

ONCE upon a long long time ago a mouse looked through the crack in the wall to see the farmer and his wife open a package.  What food might this contain?

The mouse wondered - he was devastated to discover it was a mousetrap.

and scratched, raised her head and said, "Mr. Mouse, I can tell this is a grave concern to you, but it is of no consequence to me. I cannot be bothered by it

The pig sympathized, but said, I am so very sorry, Mr. Mouse, but there is nothing I can do about it but pray."Be assured you are in my prayers."

So, the mouse returned to the house, head down and dejected, to face the farmer's mousetrap alone.

That very night a sound was heard throughout the house -- like the sound of a mousetrap catching its prey.

The farmer's wife rushed to see what was caught. In the darkness, she did not see it was a venomous snake whose tail the trap had caught.

The snake bit the farmer's wife. The farmer rushed her to the hospital, and she returned home with a fever.

Everyone knows you treat a fever with fresh chicken soup,   so the farmer took his hatchet to the farmyard for the soup's main ingredient.

But his wife's sickness continued, so friends and neighbors came to sit with her around the clock.

To feed them, the farmer butchered the pig.The farmer's wife did not get well; she died.

So many people came for her funeral, the farmer had the cow slaughtered to provide enough meat for all of them.

The mouse looked upon it all from his crack in the wall with great sadness.

So, the next time you hear someone is facing a problem and think it doesn't concern you, remember -- when one of us is threatened, we are all at risk.

So is the case with these three aspects of Inflation, Interest rates and  Equity Markets.

Inflation is referred to as a phenomenon when prices are going higher and there is a higher demand due to which the prices go up. One of the ways of cooling of inflation is to increasing supply, but that usually takes a little time since you have to set up new facilities or import newly etc.. So usually govts world over use their monetary policy as a means of controlling inflation. That is to raise interest rates, when the money becomes dearer people are more careful about where they want to spend it and as a result there is immediate drop in demand leading to a lesser inflation.

So whenever Inflation moves up, Interest rates also move up. So there is a direct correlation between Inflation and interest rates.

Similarly when interest rates move up, the monies invested in stock markets are pulled out by investors supposedly for the following reasons :

While this cannot be generalized and this is too simplistic an explanation to go by. It is safe to say that there is definitely a correlation between different asset classes and what is happening around the economy. To believe that one is insulated is like the animals in the farm.

There will certainly be a correlation, only the degree of correlation and the quantum of impact will be different and difficult to predict in advance.