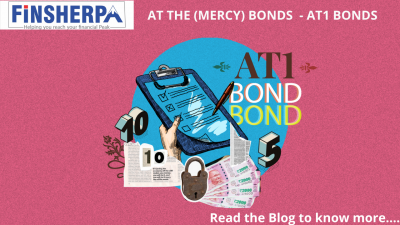 As interest rates of Bank Deposits were scaling down a few years ago.. investors during their eternal search for high returns with low risks discovered the AT1 Bonds. So while the SBI Fixed Deposit would give me 6%per annum for a three year term, the SBI AT1 Bond would provide a rate of say 9% per annum ( Example) and that too for a period of at least 8 to 10 years if not perpetually. If the investor needed liquidity he could always sell in the secondary market and realise his capital. Seems the perfect Manna for the interest craving investor.

Let us see what really happened, but first let’s understand what is  AT1 Bonds.

What is an AT1 bond?

It is an Additional Tier – 1 capital referred to in short as “AT1 bond”, which is unsecured, perpetual and which is not redeemable. It consists of a call option, where the bank alone has the rights to recall  the bond. The bank will set a call date in which it can buy back the bond if needed, technically it has no maturity date in nature (till the bank decides to buy back the bonds). AT1 bonds issue a fixed interest rate called coupon rate.

The AT1 bonds concept came into picture when the whole world went on crisis in 2008,a set of measures was taken after the crisis which was developed by  Basel Committee on Banking Supervision (BCBS) committee called basel norms and which was agreed  internationally. Make the banking sector strong enough to withstand economic and financial stress; reduce risk in the system, and improve transparency in banks. Not every risk is covered in the Basel norm before the 2008 crisis. Basel norm has a series of 1,2,3 currently Basel norm 3 is in effect. If the capital ratio of the issuing bank falls below 8% the issuing bank can write off the AT1 bond.

One of the  key norms of  Basel 3 norm relates to minimum capital requirement.

Last year Yes bank wrote off its AT1 bonds worth of Rs 8,415 crore on march 2020. Hence AT1 Bonds are not the safe investment that investors had imagined.

Additionally, on march 10th 2021 SEBI has told mutual funds to value these perpetual bonds as a 100- year instrument which means it makes the mutual funds to assume that the bond will be redeemed in 100 years from date of issuance. It has also asked mutual funds to have only 10% of AT1 bonds in the asset of a scheme.

As per the SEBI rule it is considered as a 100-year maturity which is an ultra-long term. The ensuing risk due to interest rate movements would make the bonds unviable to various investors.Example a 0.10 % rise in yields would result in a 9.9% drop in the price of the bond, and vice versa leading to an extremely volatile price movements not suited to institutional investors. Thus making the instrument unattractive.

Update : The Finance Minister has asked SEBI to review the 100-year valuation which will lead the mutual fund house to sell the existing bonds which will lead to loss. SEBI has revised its earlier order to state that the 100 year valuation criteria will be implemented by gradually increasing the maturity period over the next few years, thus providing temporary relief to institutions esp Mutual Funds to realign their portfolios to fall in line in the future. However the future for AT1 bonds as an attractive investment vehicle appears bleak.

Do you want to know more?