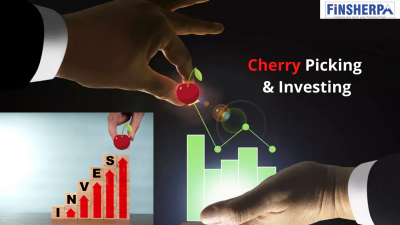 I opened the newspaper last week,  the front page was filled with  a large advertisement of a teaching institute ( that was making sky (Aakash) high claims ). The institute claimed that 5 of the top 10 ranks in IIT JEE entrance exam were students trained by it. Now it could be the truth, but it is also likely that not all but a few of  the rank holders were made students after they got the rank. As parent of a child  wanting to pursue IIT, I am immediately drawn to spending a few lakhs to ensure that my child gets a solid shot at  IIT JEE.

You will find that this  is the common truth  with all advertisements,

Did the famous actress have clear skin because of the  Big Soap brand or did she get the advertisement contract due to her already clear skin ;

This is referred to as “Cherry Picking”. You portray data in such a manner that the cause and effect is distorted to show the product that is being marketed, in  a favourable manner.

In the financial world this is more subtle but  prevalent all the same,

Mutual Fund companies  have an entire teams in their office looking at performance datas of  their investments, they will shine their light brightest on the schemes that have done well in the immediate past and not on all the schemes. Because we tend to buy based on past data, irrespective of  how the future is likely to be.  These shining past performance datas are what compels us to buy many a fund.

This is akin to a person, throwing a dart on board and then going about drawing the bulls eye around it. So whenever you see an advertisement or a news report that portrays something rosy, remember that it could be so that you react to it. So go deeper, ask questions that are counter to the generic flow and then if you are still satisfied , go ahead with your investments.

Remember to run the Cherry Picking Filter, when you see a Rosy Picture. I assure that it will help you make a better decision.